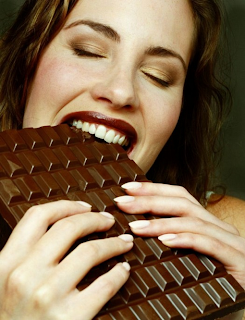 Dark chocolate is recognised as being better for your health than milk chocolate. The Huffington Post reports via Archives of Internal Medicine. Ideally the chocolate will contain over 60% cocoa solids.
Dark Chocolate that contains over 60% in cocoa solids is high in fibre therefore it is filling or feels filling and actually reduces food cravings.
In a study using over 1000 people it was discovered that people who eat chocolate regularly have a lower BMI than people who don’t eat chocolate.
Eating chocolate regularly increases the production of insulin therefore decreasing the risk of diabetes.
Cocoa contains anti-clotting blood thinning ingredients similar to those found in aspirin.
An ingredient in chocolate called Theobromine reduces the activity of the vagus nerve which triggers the brain to produce repeated coughing when people are unwell. Scientists are trying to create a drug that produces a similar effect as it would be safer than codeine; a drug that is regularly used to treat coughing. Reference.

Would you believe that 12 ounces of beer a day has been shown to produce the following positive side effects:
Beer contains silicon which was found to promote stronger bones. People who drank 1-2 beers a day have stronger bones that those who don’t.
There are over a hundred studies to show that regularly drinking small amounts decreases the risk of cardiovascular disease.
Regular drinkers have a 20% less chance of brain decline.
It reduces the risk of stroke as small amounts of alcohol reduce potential blood clots.
Reference. 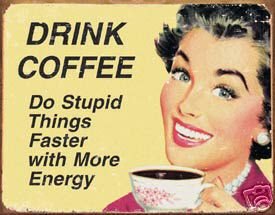 In a study of nearly 50,000 men, researchers found that males who are heavy coffee drinkers (six or more cups per day) were 20% less likely to develop prostate cancer than men who drank one cup of coffee a day. In relation to lethal prostate cancer the figures were even higher; men who are heavy coffee drinkers were 60% less likely to develop the cancer.
Reference.
Posted by Unknown at 14:25 No comments:

The Times of India just featured this article on food combinations; combining specific foods will actually enhance the beneficial properties of those foods – they will be more beneficial than if they were eaten alone. I have mentioned many of the foods that are listed in the article in this blog already but I think this info takes it to another level.

Broccoli and mustard:
The combo of Broccoli and Mustard wouldn’t be the first two food items that I would think about combining but broccoli contains sulfurophane which is both anti-carcinogenic and anti- diabetic. Mustard contains the enzyme myrosinase which assists the body when absorbing sulfurophane.

Tomato and Olive Oil:
A combination that most people will be more readily accustomed to. These two  go hand in hand thanks to the influence of Italian cooking. Additionally, if I have learned one thing from writing about healthy eating it is basically that I should be eating tomatoes for town and country. As already discussed tomatoes contain lycopene which is a potent anti-carcinogenic and olive oil is an anti-oxidant and a source of good cholesterol. Lycopene is better absorbed into the body in the presence of olive oil. When absorbed it becomes highly beneficial for the heart and it purifies the blood.

And here is a recipe that contains all four of the above ingredients; it is a salad so the tomatoes are uncooked and the broccoli is only cooked for one min………….but it also contains one and half cups of mayonnaise, obviously you can reduce this to whatever amount you want. The recipe is by the American cook, Ina Garten. Ina’s recipes are known for being a little decadent but they are also known for containing as much fresh produce as possible, she lives in the Hamptons and owns a famous restaurant there called the Barefoot Contessa. The reason I included her recipe is because I made her white chocolate chip cookies before and they were pretty amazing, also my sister has one of her cook books and she tells me that her recipes actually work. Ina herself is an interesting character she worked in the White House under Ford and Carter as the budget analyst, part of her remit involved writing the budget for nuclear energy, I can see how relocating to the Hamptons and opening a gourmet food store seemed like a nice idea after a job like that, even if she did turn the small gourmet food store into an empire.


Not only will healthy eating contribute to a healthy body, eating the correct food can help to target illnesses that have already taken effect within the body. Here is a list of foods with curative properties:

Yogurt and Kafir:
For yogurt to be truly beneficial it needs to contain live cultures which not all shop bought varieties  contain. Yogurt containing a live culture such as lactobacillus can reduce the severity of bronchitis, frozen yogurt is also good for a throat infection.

Fish and Omega 3:
Fatty fish that are rich in omega 3 oils such as salmon and tuna and also flaxseed can be used to reduce inflammation. These anti-inflammatory fats are shown to protect the respiratory system from infection.

Fruit and veg:
Asthma tops the list of chronic diseases most prevalent among American children. In a survey carried out on 690 children in Crete, a country where few asthma symptoms develop, studies found that 80% of children consumed at least two pieces of fresh fruit per day and 68% consumed two pieces of veg a day.

Fish and poultry:
The body needs sufficient amounts of protein to recover from illness, protein rich foods are essential for tissue repair and for maintaining a strong immune system.

Whole grains:
Although carbohydrates are the main source of energy for the body they are not always particularly nutrient rich or beneficial in other ways. Wholegrains retain protein, fiber, vitamin and mineral content that has often been depleted in processed grains such as white flour. Whole grains promote digestive function, tissue repair and immune system strength.

From the Livestrong website.
Posted by Unknown at 04:56 No comments:

Practical ways to get your 5 a day

The NHS in the UK list some very practical and frugal ways to maintain your five a day on a budget. Reference.
None of the tips are rocket science but it is a reminder of what to bear in mind when next in the supermarket:

There is plenty of current research that explicates the health benefits of certain types of chocolate and the cocoa bean which might be worth returning to for another blog entry at a later date. 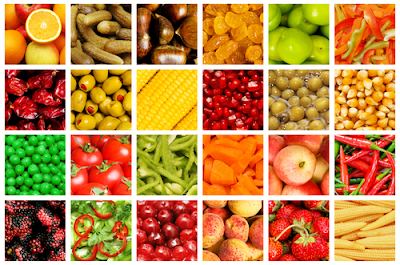 What Not To Eat

One of my favourite cooks, for all the wrong reasons, is the American cook; Paula Deen. Paula is based in Savannah, in America's deep south, and her recipes reflect her heritage. She is a proponent of southern style 'home cooking'. The Paula Deen empire, and it is an empire - consisting of TV shows, cook books and restaurants, and healthy eating exist on two parallel planes, her food is not for the health conscious. I do get a kick out of some of her recipes simply because of the sheer indulgence factor and her blase approach to calories.  I also find her hugely entertaining.
This is a classic! She deep fries a full turkey. Although, apparently it is not that strange to deep fry large feathered animals in this part of the States, the deep fat fryer she uses is made especially for turkeys. I think the end result looks rather tasty too.
You should also check out some of her other classics; deep fried cheesecake, a lasagna sandwich or a burger topped with a fried egg and bacon served inside a DONUT.
Yummy.......simply serve with a defibrillator.
Posted by Unknown at 11:21 No comments: 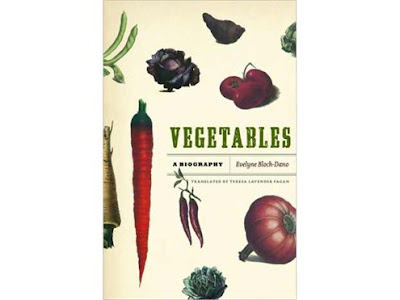 There was a recent article in the The Independent newspaper about the French and their obsession with vegetables. The journalist Emma Townshend was waxing lyrical about her trip to a local French restaurant, where she couldn't quite identify what vegetable formed the basis of the soup she was eating, the waitress, who spoke some English, could only proffer the mysterious vegetables name in French.
The article goes on to applaud the French for their highly nuanced knowledge of vegetables which is cultivated from a young age, apparently children under the age of six can decipher between the leaves of a mache and frisee lettuce. To further prove the point, French Historian and Biographer, Evelyne Bloch-Dano has just released a biography of .....you guessed it.....the vegetable. The book focuses on everything from Christopher Columbus and his initial reaction to tasting a chilli in the Americas to 'the allotments created by starving 1945 Berliners among the ruins of shelled houses "Lifes revenge over death"...you can read more of Townshends review here: reference. 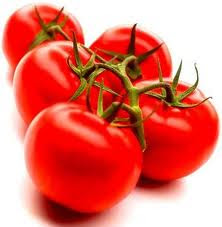 The humble tomato contains large amounts of lycopene which assists the body in the fight against cancer.  Not only does lycopene prevent numerous cancers from developing, it has been proven to stop the growth of pre-existing cancer cell structures within the body and additionally it is not denatured or affected by heat so your Italian pasta sauces are actually quite good for you....reference.

Tasty and informative......it's my first blog!

Eating healthily, much to the dismay of the multimillion dollar dietary industries, is an easy way to shed the pounds and give the body the nourishment it is entitled to.

Although the words 'health' and 'food' can conjure up images of shops filled with hippies and that smell like pet food stores, to eat healthily doesn't have to involve burying your head in a bag of horse oats and drinking milk thistle smoothies.

The objective of my blog is to chat about the ways in which you can munch yourself to a better, healthier existence with an onus on food that benefits the body but i am permitting myself the scope to discuss food in all its incarnations, if needs be, as from time to time it is good for you have a treat, as the french say 'everything in moderation including moderation'.

One of the most basic ways to ensure that the food you are eating, especially if you have gone to the trouble of preparing it and cooking it, actually contains or retains it's health benefits; is to cook it properly. So take broccoli for example - i think most people are already aware that if you boil it into a soggy mess the nutrients are rendered useless - the florets and stems should be cut into small pieces and let stand for about 5 to 6 minutes before cooking. The broccoli should then be either steamed or boiled for 3-5 minutes. This maximizes the vegetable's anti-carcinogenic properties. Broccoli provides one of the highest concentrations of sulforaphane found in food, sulforaphane increases the enzymes in your liver that fight cancer inducing chemicals found in other food and the environment. There is lots more scientific info here: reference.


Fact: Trillions of flies blanket the surrounding villages of Lake Victoria in Africa every year. The locals, being resourceful, turn the flies into a tasty nutritional burger.


Speaking of Broccoli, I used to work in one of Dublin's best loved restaurants/bakeries called Panem, which is located on Ormond Key. I recall the owner and chef, Ann Murphy, used to serve a simple but delicious Broccoli soup, it is definitely worth checking out if you are visiting Dublin. While most of the menu might not be described as 'healthy' eating it is all lovingly made, the pastries and breads are baked on the premises from 3.00am each day and Ann prides herself in sourcing only the best ingredients - olive oil imported from Italy, chocolate from Belgium. It has a five star full star rating in the gospel according to Tripadvisor. 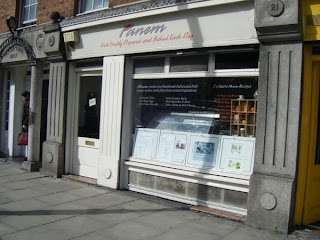